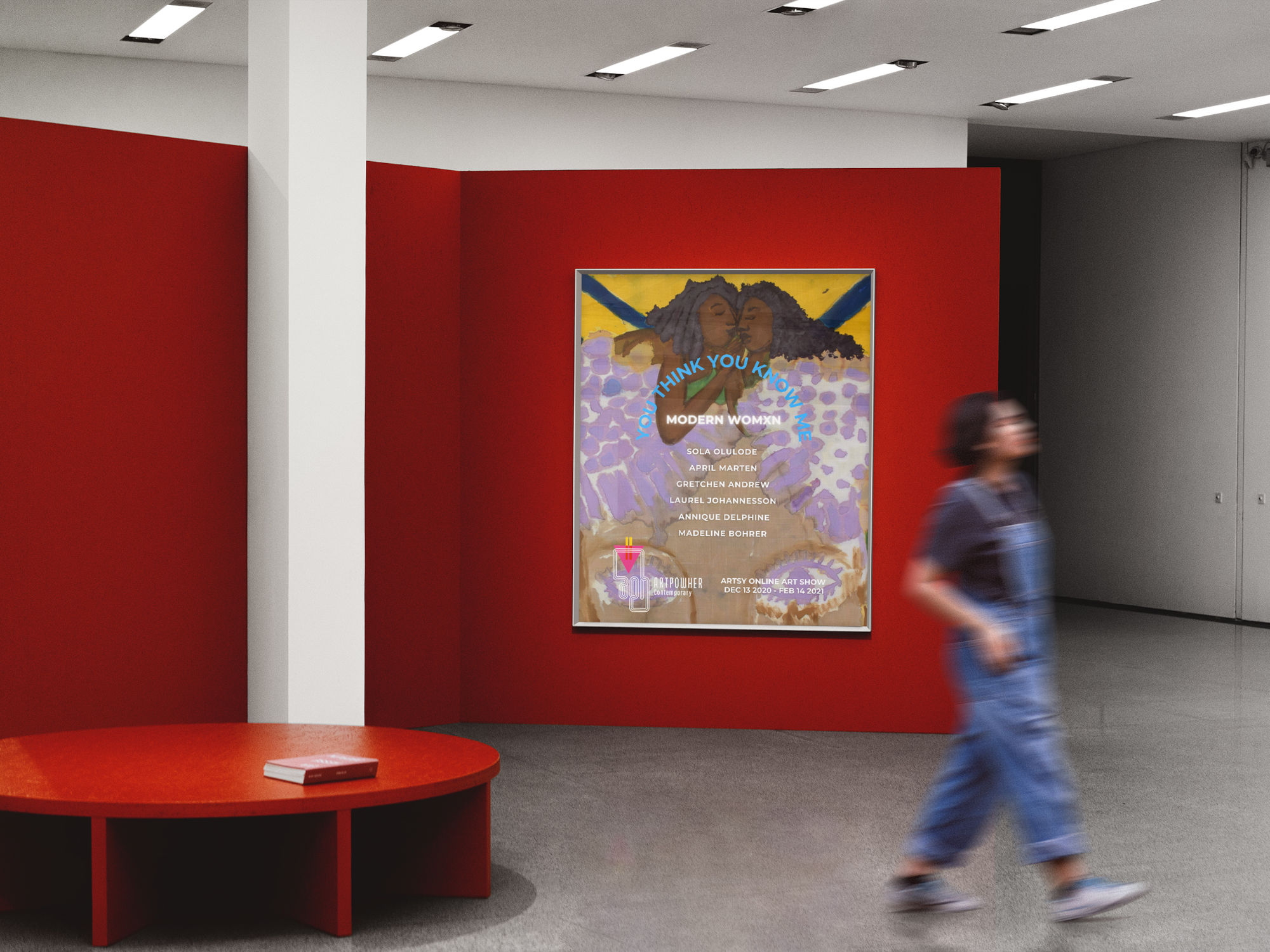 MODERN WOMXN. You think You know Me.

ARTPOWHER Contemporary is pleased to present the first in a series of group and solo exhibitions addressing questions about being a womxn in the 21st century. How do womxn feel and express themselves today - socially, sexually and politically? What distinguishes the work of womxn artists and is gender a major aspect that affects their artistic creation?

Gender roles are influenced by social beliefs and generalisations that have been accepted for centuries. Society observes womxn in different social roles and deduces characteristics that constitute gender stereotypes. MODERN WOMXN. You think You know Me, focuses on reframing the representation of the female figure in contemporary art. Realigning, examining or questioning the relationship of old-fashioned gender bias versus non traditional concepts, seeking an elevated language; sometimes feminine, unashamed, intimate, poetic, sometimes conceptual, disruptive or surreal. But always reclaiming ownership over the portrayal of a Modern Womxn.

MODERN WOMXN. You think You know Me, brings together six womxn artists with different approaches and cultural experiences: Sola Olulode, April Marten, Gretchen Andrew, Laurel Johannesson, Annique Delphine and Madeline Bohrer. They all have a unique creative practice addressing their own social artistic position within their environment. The artistic approach may be different but all artists represent a contemporary sense and implication of a womxn’s individually shaped perspective, by expressing their own concept of a Modern Womxn in their artistic discipline, process or narrative.

WHY THE TERM MODERN? In a more contemporary use, "modernity" often refers to the cluster of social, historical & cultural developments from the late 19th century to the late 1920s, the second industrial revolution, the emergence of consumer culture and the different art movements from symbolism, to futurism, to dada, to surrealism. This conception of modernity fuses the cultural and historical meaning of the term. Unlike earlier periods and movements, modernity and modernism were from the start insistently identified in terms of gender, and with "modern" we want to emphasise the term womxn. And yes, there are much more stories that need to be told, (cultural) aspects to be included. Let’s start by listening to the stories that want to be told by April Marten, Sola Olulode, Gretchen Andrew, Laurel Johannesson, Annique Delphine and Madeline Bohrer.

The term womxn is an alternative spelling of the English word woman. It is used to avoid perceived discrimination in the standard spelling and to explicitly include or foreground transgender and non-binary people.


EVERYTHING
Lynn S. Battaglia Co-Founder and Curator, She Performs

While 2020 was a challenging year, at least it didn’t set us back in our striving for equality. Right? No. What this year did was make it clearer than ever, that there are still many jobs - mostly unpaid - done rather by womxn than men. Child care, care for the ederly, household, etc. were especially challenging for womxn this year. Yet, barely anyone noticed. Why? Because it was nothing new, but just an intensification of what we are used to and expect to happen.

The six artists in this show are not willing to accept facts, just because that’s how things have always been. Through reexaminations of their own body, identity and society’s ideals for women, they are defining the modern womxn as someone who has a voice and stories to tell that need to be heard. The modern womxn is unapologetic of herself and the way she positions herself in the world and art history. The modern womxn is a storyteller. Drawing from their own personal experiences she is allowing for history to be retold from new perspectives.

Annique Delphine’s delicate paintings invite us into a wonderful world of phantastic beings that are a manifestation of her exploration of her own identity. April Marten, is using performance as the ultimate tool of storytelling to tell the story of a woman that never was. Sola Olulode is weaving stories in her paintings about black identities and communities.

- You don’t know me, but if you listen closely enough, I’ll tell you everything you need to know.

The modern womxn is a warrior; unapologetically carving out a place for herself in our society. She wears her identity like a badge of honor. In her works, Madeline Bohrer unapologetically uses technology and social media to discuss the notion of self - hers as well as the viewers. While Gretchen Andrew explores and redefines the (art) world, through her use of collaging materials.

- I’m here, whether you want to know me or not.

- You can only fully know me by allowing my body to be.

The modern womxn is a force to be reckoned with. She’ll stand her stance. Always. Unafraid, she will stand up for what she believes in over and over again. - I’ll make myself be known, you just need to show up.

The modern womxn is everything. Now get to know us.