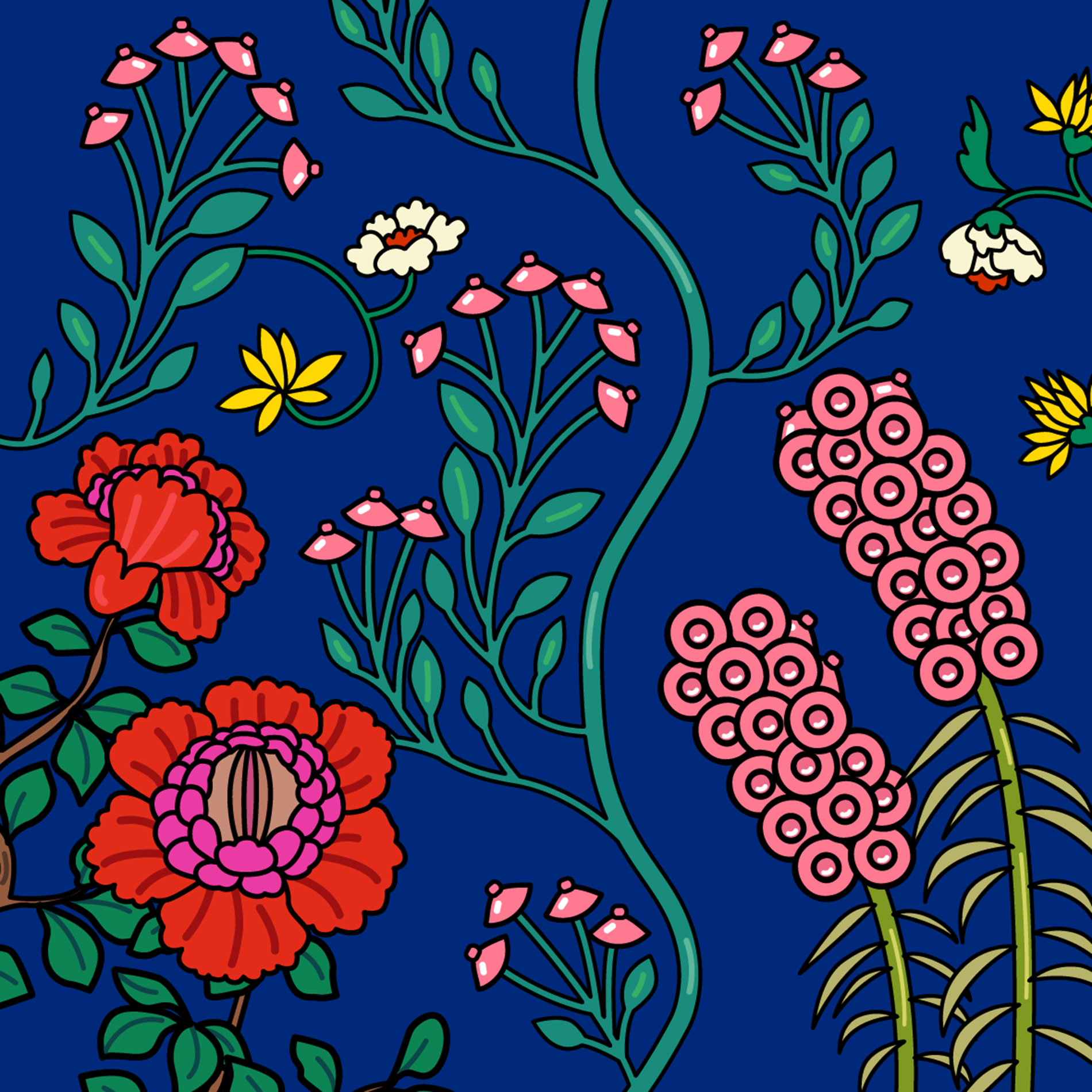 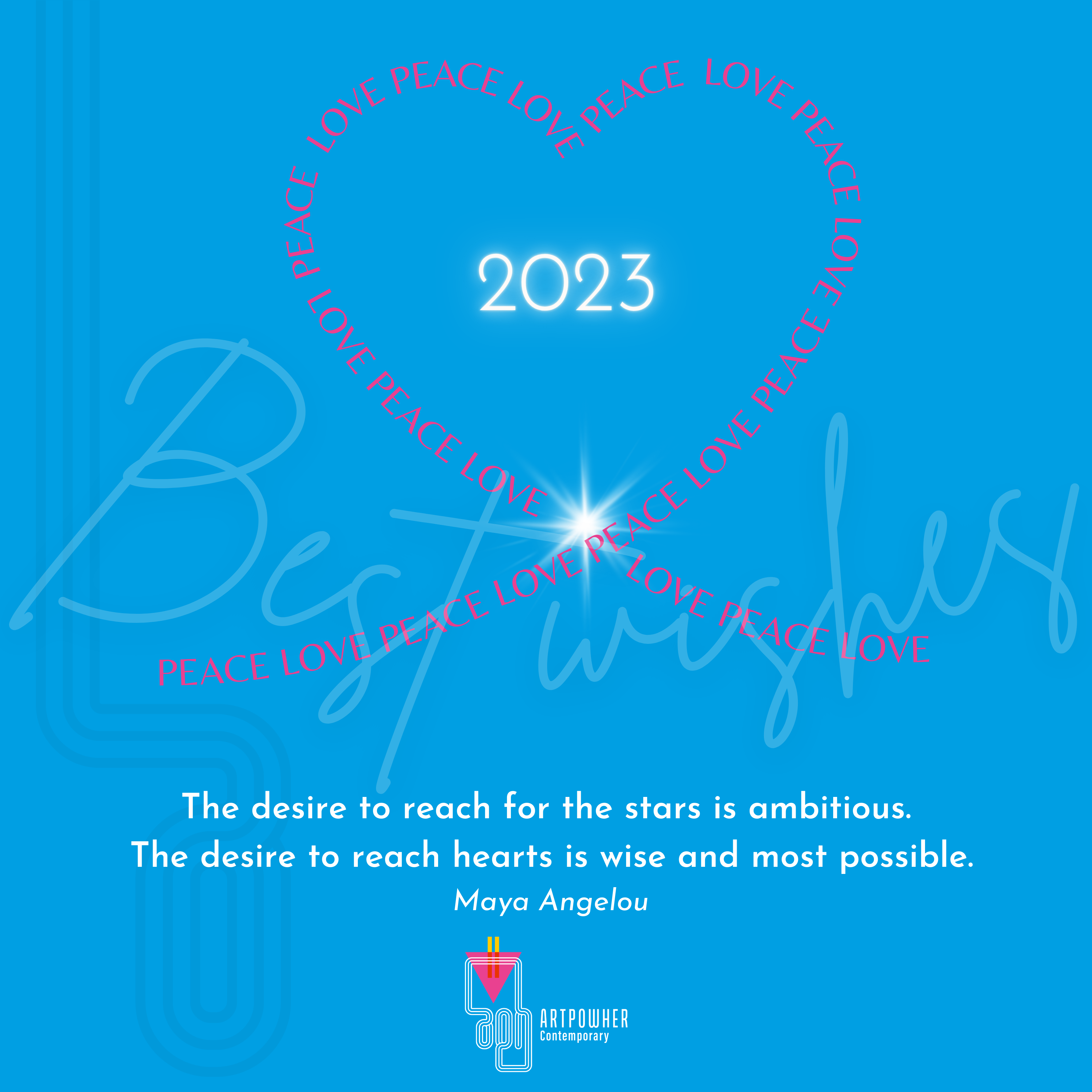 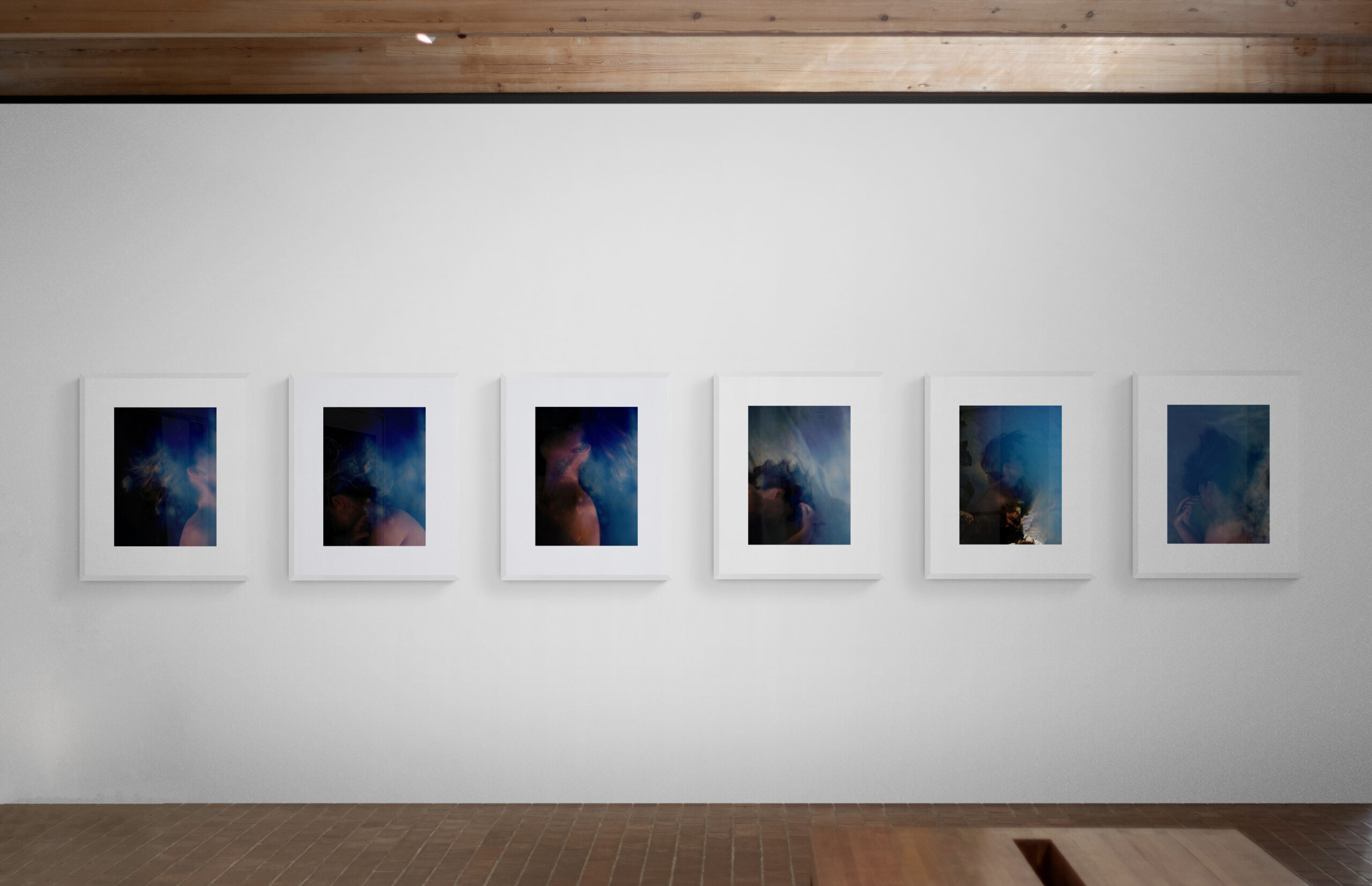 We are delighted to present for the first time Laurel Johannesson's series WAKE. Stunning photographs of Johannesson's solitary venture on investigating her ancestral roots, by immersing herself into the rough and unpredictable waters in Iceland.

Water is a sacred symbol in most cultures, often referring to rebirth, transformation, cleansing, transition and metamorphosis. Water possesses healing powers. Water flows, regardless of any obstacles.

noun
* a watch or vigil, sometimes accompanied by ritual observances.
* a trail of disturbed water or air left by the passage of a ship or aircraft.
* used to refer to the aftermath or consequences of something.

verb
sleeping.
* emerge or cause to emerge from a state of sleep; stop

I found my ancestral roots and perhaps most importantly, my primordial connection to water. My transformative summer in 2006 in Iceland was a metaphysical and often psychological experience that has shaped and influenced my work ever since.

That year, I was still very involved with the imagery that I was making underwater. However I was starting to notice that I was becoming more and more interested in what was happening on the shoreline, the liminal space of the beach and the solitude and vastness of the spaces. The light in Iceland added another aspect to those thoughts. Iceland plays with your concept of time... nighttime that appears to be daytime, daytime that masquerades as night. Time in Iceland is a strange thing, and I can see now that my experiences there have coloured the way think about temporality and the way I construct an image today.

Or perhaps it was there in my DNA all along.
— Laurel Johannesson

"Johannesson’s research followed a vision whereby she utilized the waterous environs as a means to camouflage the figurative self; a way of actually hiding herself in a skin that mimics the surrounding moss, sand, rock, reflections, or refracted depths. On one level, of course, she is looking to be swallowed up by these two places; her past lives in the present tense. Her personal isolation in the project, let her wander almost as invisibly as her alter-ego depicted in the images. Always photographing from a fixed point on land; the artist was able to place herself into the modesty of enclosed spaces of tidal pools or inlets. Each shot was carefully considered and planned out as to time of day, weather conditions, and accessibility or distraction by others. This created an opportunity to disguise both the form and the space to a degree, into her own personal ritual of bathing, and all that is associated with that solitary act."
— Derek Michael Besant 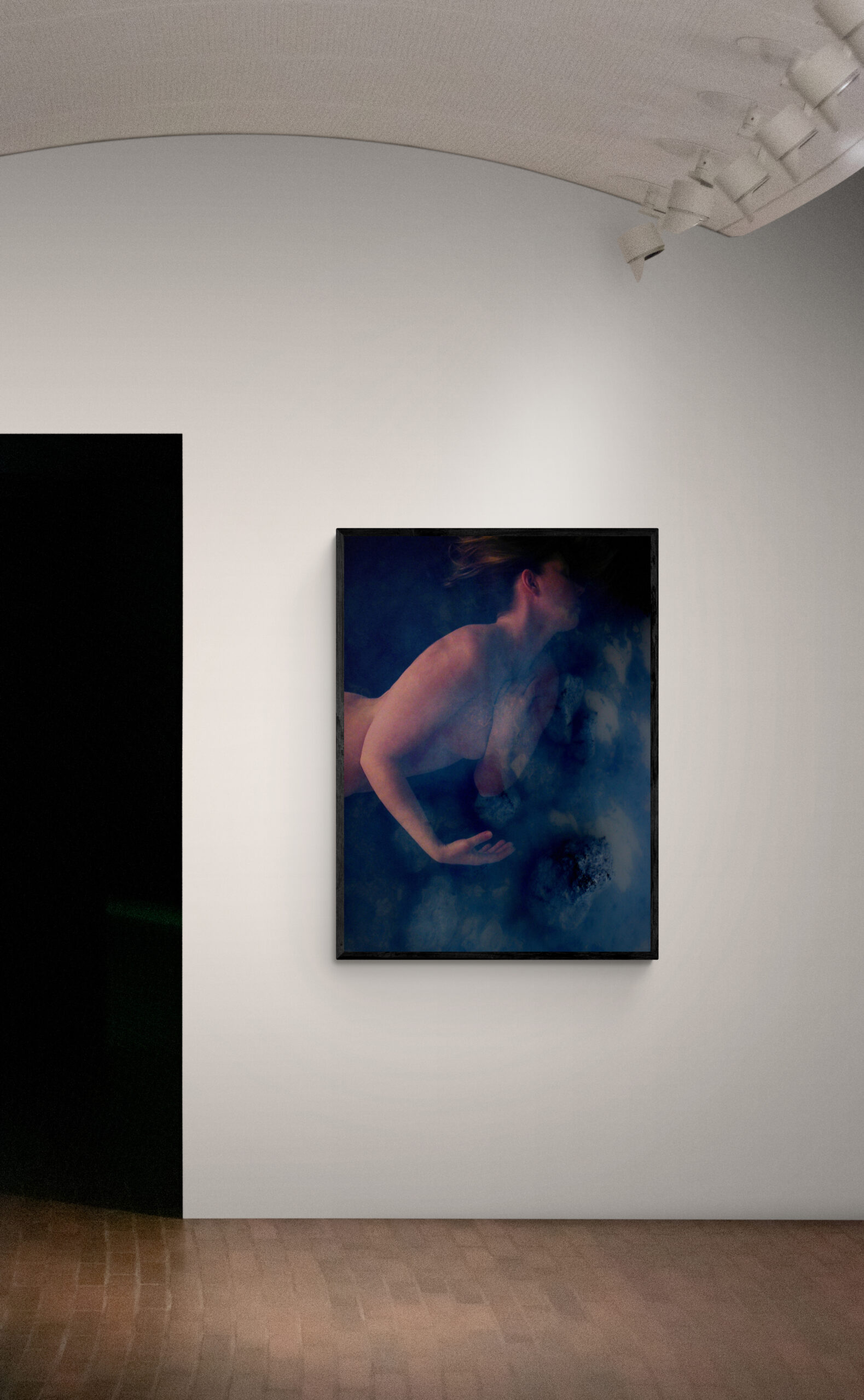 Podcast: Listen to the artist talk in conjunction with Laurel Johannesson's Online Exclusive Show WAKE. Hosted by American-Austrian art historian, writer, and curator Alexandra Steinacker-Clark, All About Art is a podcast that is all about the arts and cultural sector. 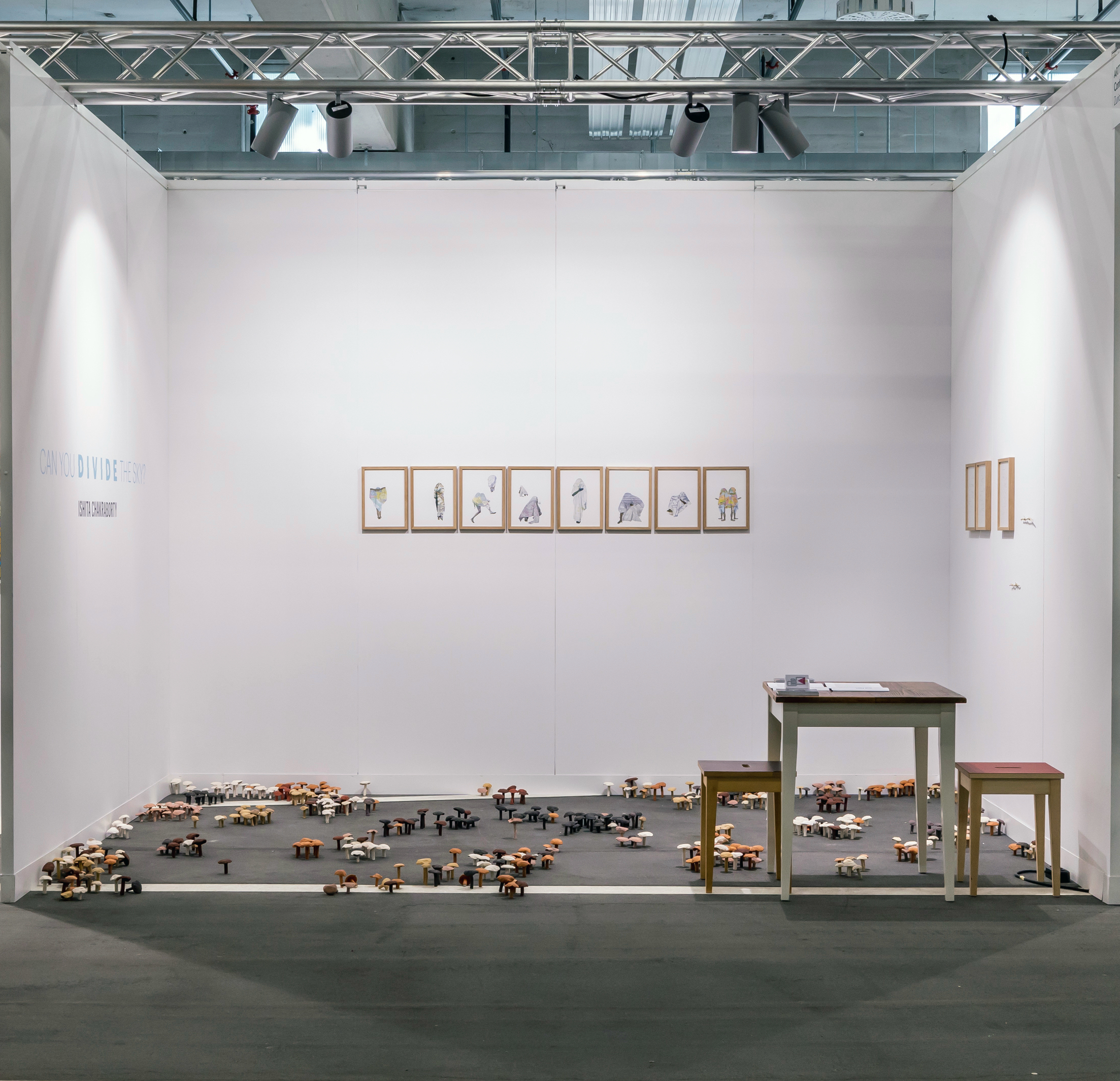 ARTPOWHER Contemporary is pleased to announce its participation at VOLTA Basel 2022, staging the solo show CAN YOU DIVIDE THE SKY? by Ishita Chakraborty (b. 1989), an artist and poet born in West Bengal, India. Chakraborty's art installation conveys a poetic portrait of our coexistence and reflects on migration and identity. 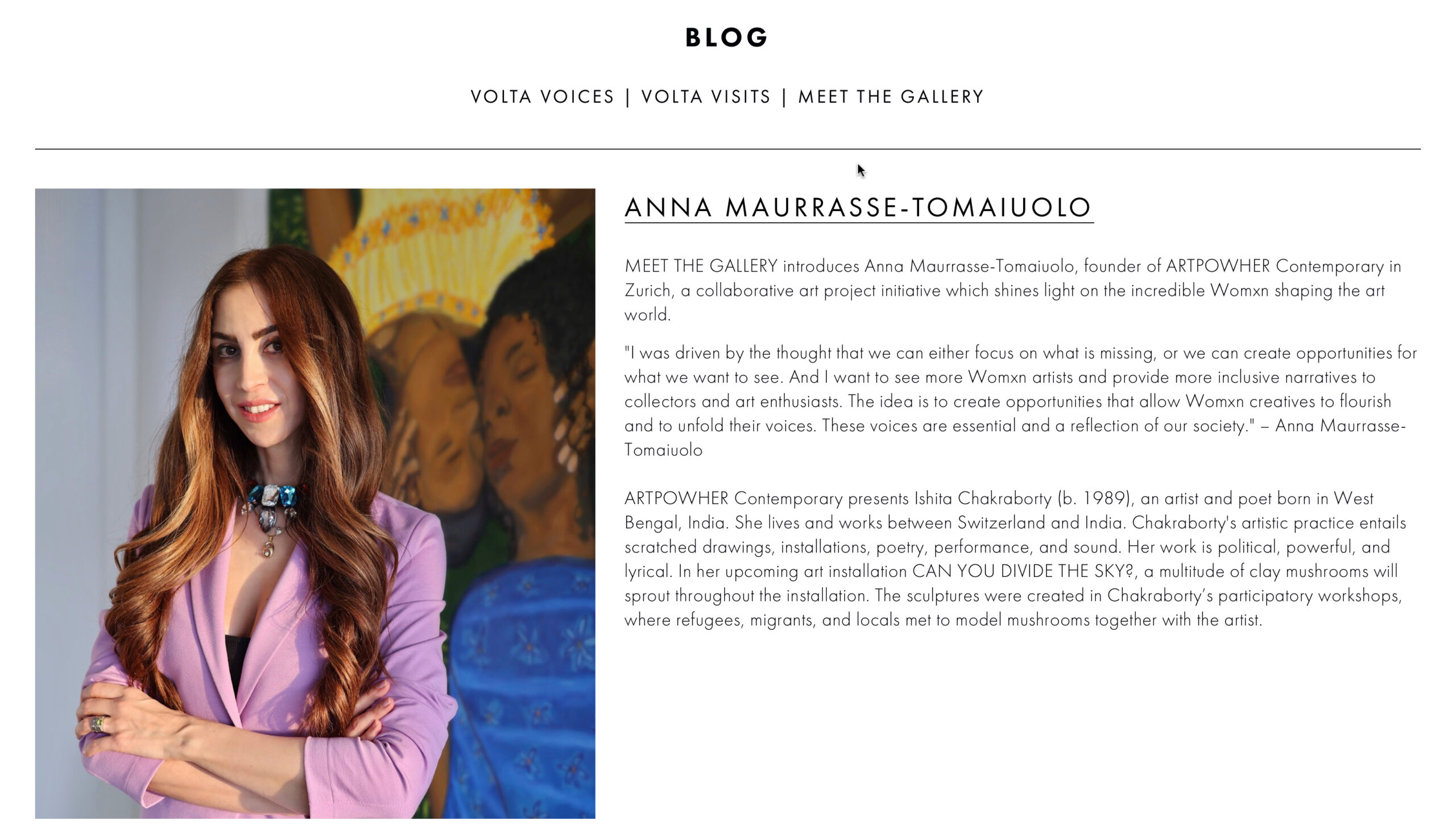 Read the full feature by clicking on the image.

Listen to Aline Alagem talking about her creative process and why she felt the need to create Blue Ripples.

Blue Ripples is a large scale painting made of four canvases attached together.
It’s oil and linen, and it was created in 2020 midst lockdown in Berlin, at a time where we are felt very claustrophobic and static.
— Aline Alagem

In Aline Alagem’s works, feminin sensuality is both a metaphor and realization of manifesting one's self. The compositions and collage-like altered scenes in Alagem’s figurative paintings hint to hidden layers that flow beneath the surface. Moments of secret longing and pleasure are “planted” in frosty arctic landscapes, asking about the possibility and impossibility of reaching the edge of desire — becoming it, or being lost in it. 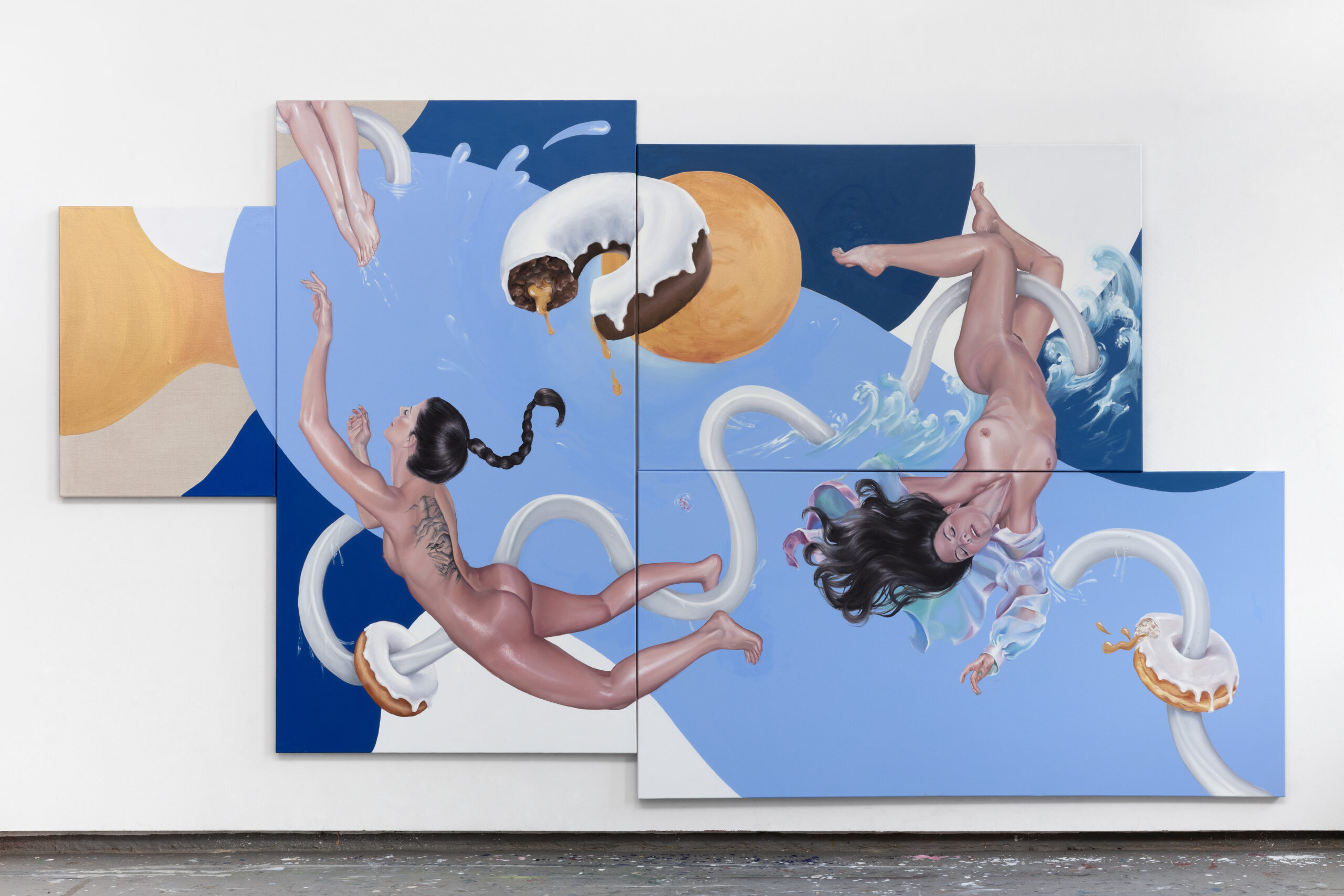 After another challenging year, we wish to express our appreciation and thank you for your trust and support.

ARTPOWHER was founded shortly before the pandemic. You have been part of the reason we have been able in continuing our dedication in promoting and presenting Womxn creatives with passion, despite the adversity of these times. We are excited and are looking forward in continuing shaping ARTPOWHER's future together with you in 2022.

ARTPOWHER wishes you a peaceful and joyous holiday season and a prosperous New Year! We will take a creative break starting December 24 and return January 10, 2022.

In the meantime, we invite you to discover unique art pieces added to our collection on Artsy, by Aline Alagem. We want to highlight the painting Blue Ripples, created in the midst of the first lockdown in 2020 — the artist’s response to the situation and Alagem's investigation of unlimited spaces and movements in her inner world. Alagem will present this work in a short video interview next month. 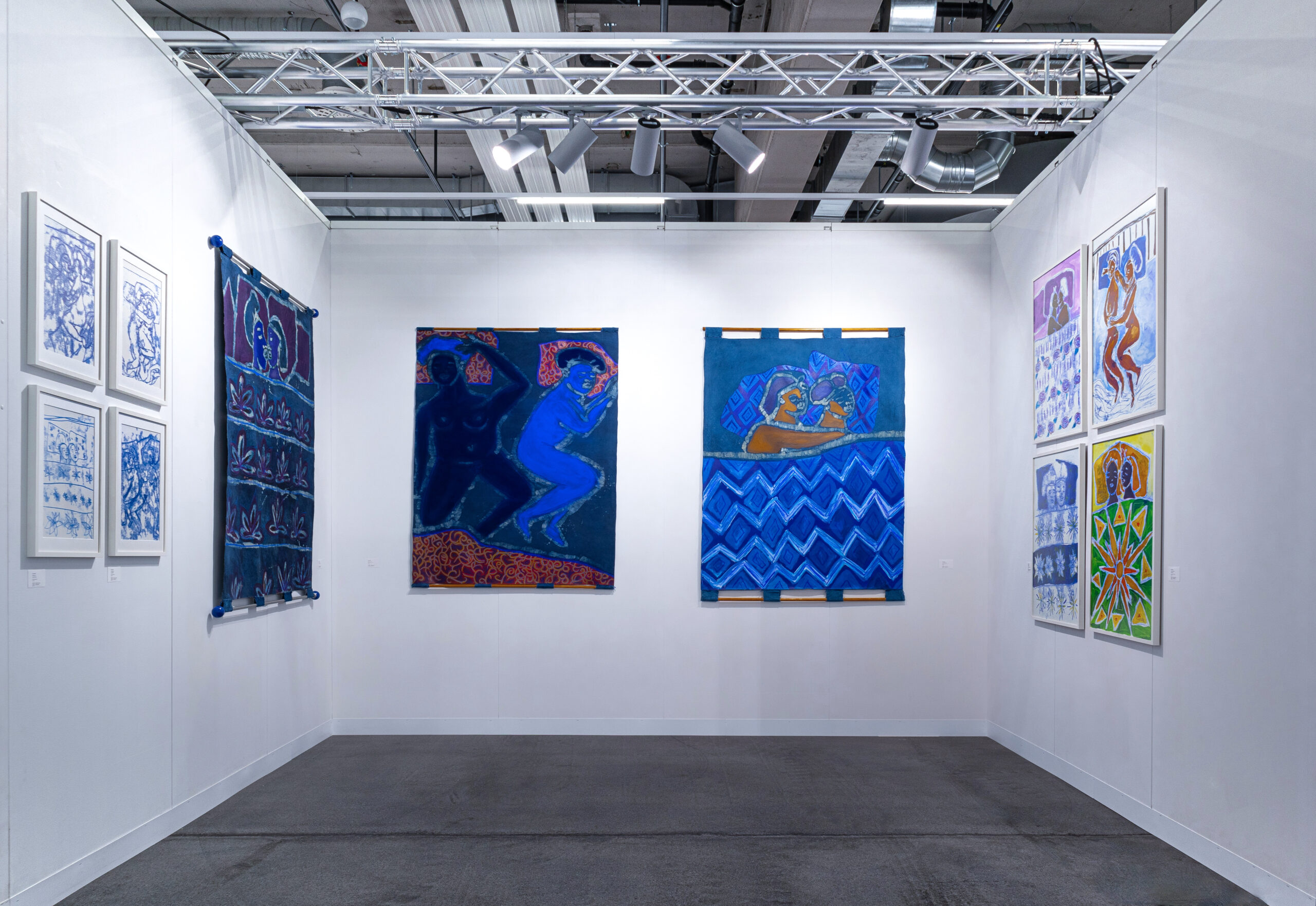 ARTPOWHER Contemporary has staged its first in real life presentation I LOVE SHARING THE BED WITH YOU by SOLA OLULODE, in Volta Basel during Basel Art Week.

I am thrilled by the positive feedback we received on the show and on our publication. I hope we were able to transport an authentic art experience. I'm proud of Olulode's new artistic approach experimenting with new ways to unfold her voice - congratulations Sola Olulode! 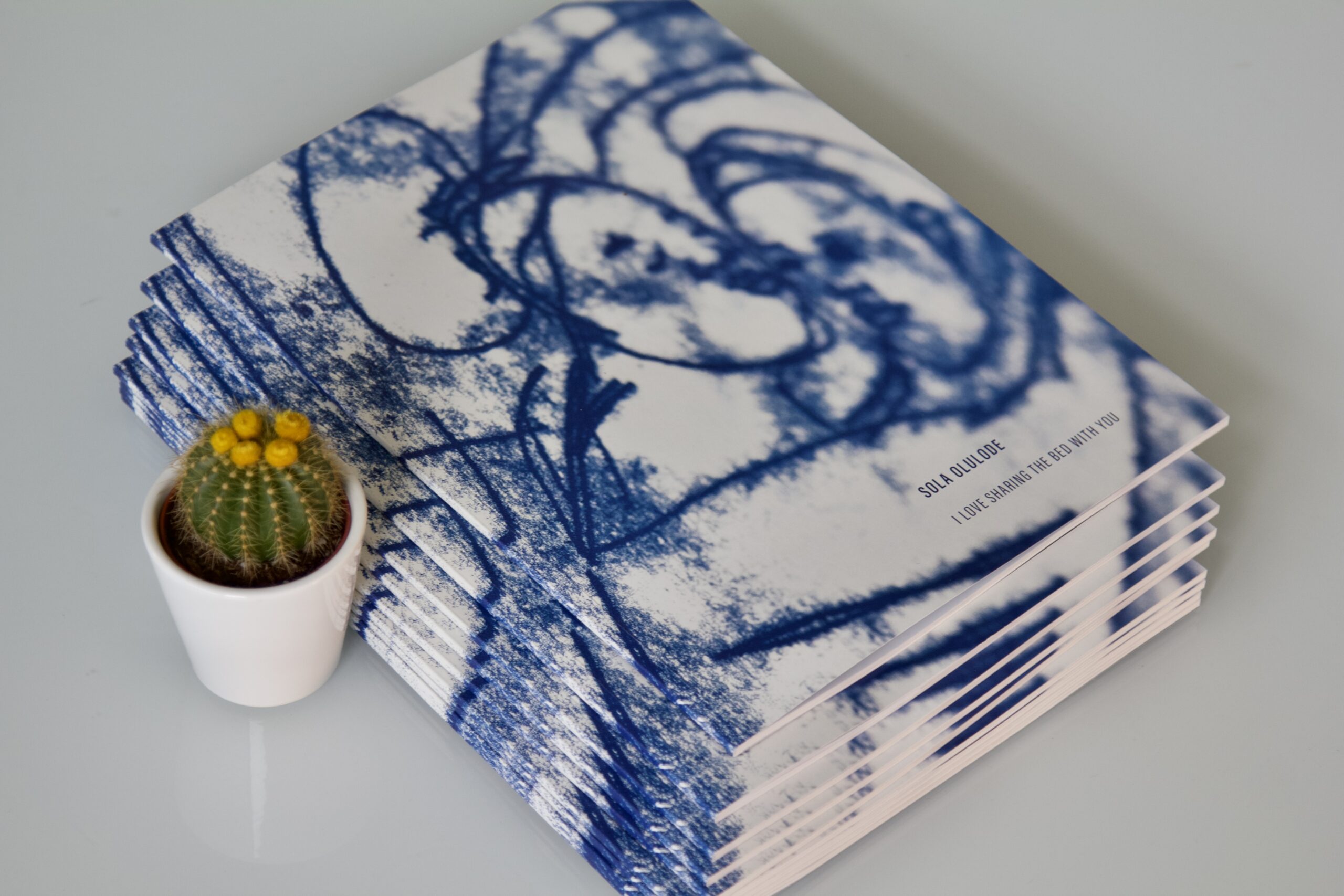 The exhibition ‘I Love Sharing The Bed With You’ is accompanied by a signed limited edition catalogue of Sola Olulode's new body of work, featuring an essay by Art Writer Pacheanne Anderson, and photographs of the artist in her studio by Luzie Zoe Lazarus.

Anna Maurrasse-Tomaiuolo, the Founder of ARTPOWHER Contemporary, is thrilled to announce the participation at VOLTA Basel 2021, staging the solo show ‘I LOVE SHARING THE BED WITH YOU’ by British-Nigerian artist Sola Olulode. This is the artists’s first exhibition in Switzerland and her first solo presentation outside of the UK.

Olulode is a London based artist who works across the medium of paint and textile influenced by Yoruba Adire textiles, an indigo-dyed fabric made in Nigeria by Yoruba women, using a variety of resist-dyeing techniques. The artist reinterprets images of majoritively Black Womxn expressed through diverse reflections of feminine energies, and inspired by her own identity as a queer Black woman.

For her first show in Switzerland and her first solo show outside of the UK, Olulode conceived over the last few months smaller works on paper and larger paintings on canvas, experimenting with new forms of presentation. READ FULL PRESS RELEASE 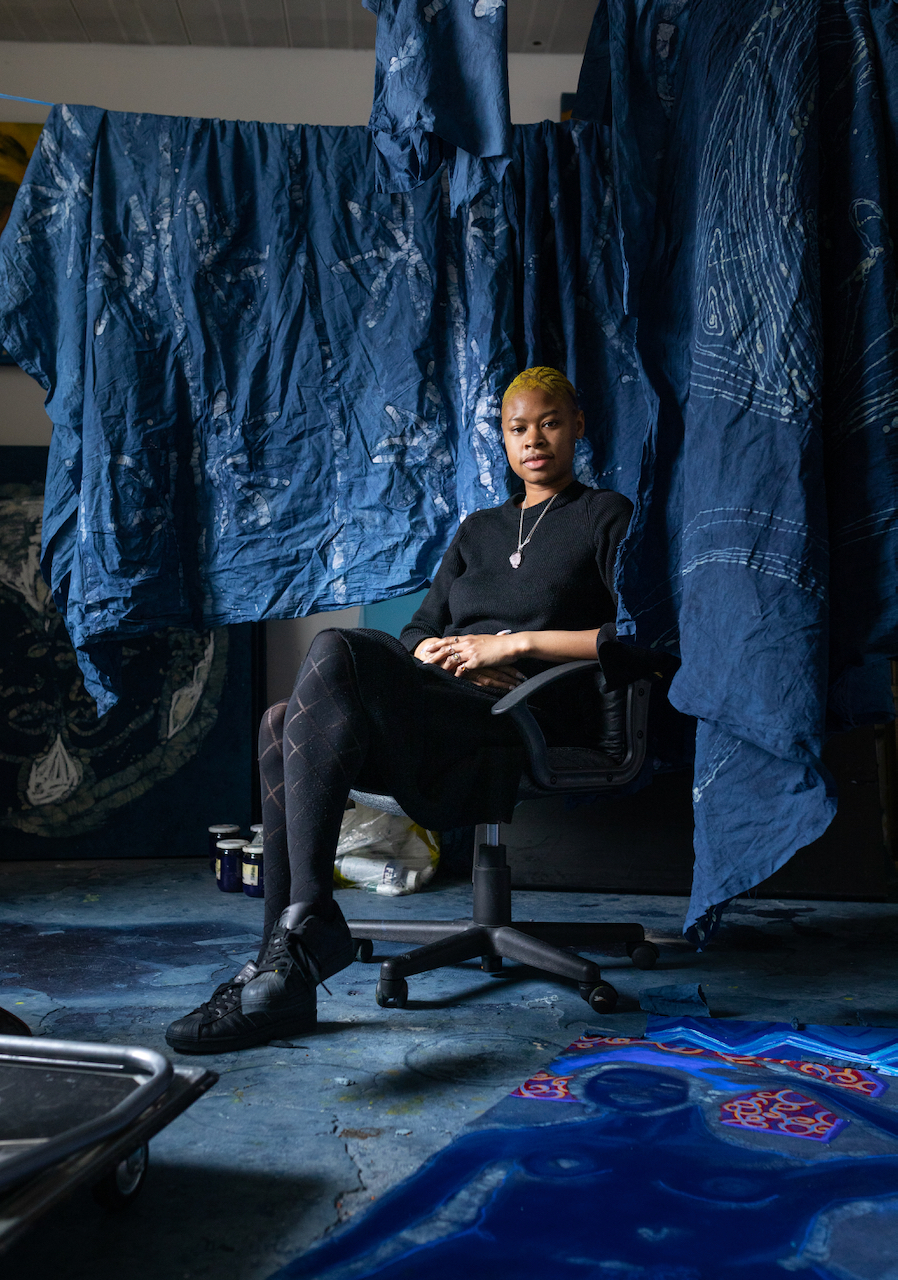 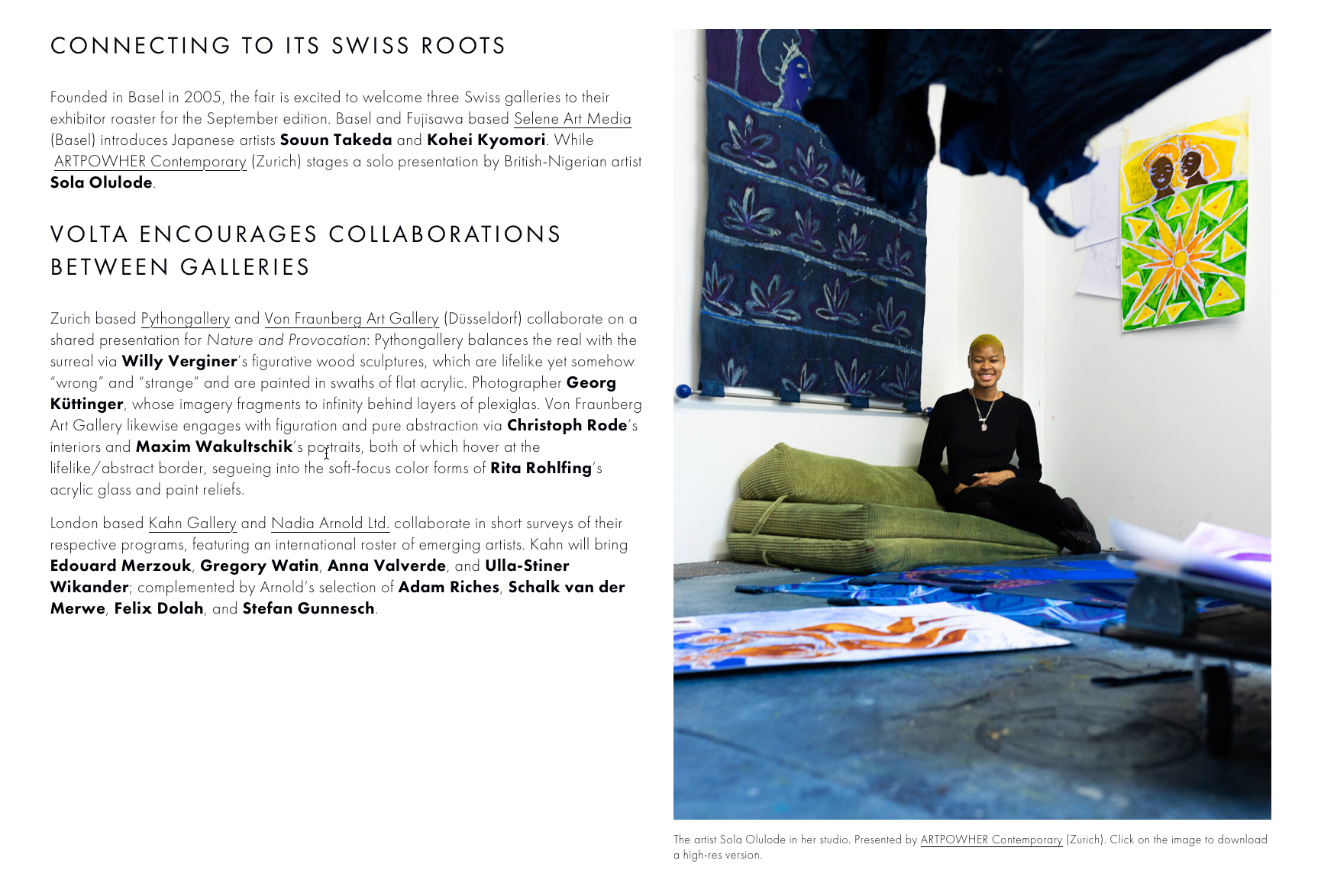 Sola's painting Laying in the Grass II  has been selected for a digital billboard campaign "Portrayals of Black Joy" launched by Artsy in partnership with Outfront Media, spotlighting emerging Black artists in major cities in the US throughout the month of February. Courtesy of the Artist and ARPOWHER Contemporary!  The campaing features also emerging Black artists - Derrick Adams, Dominic Chambers, and Kay Hickman. 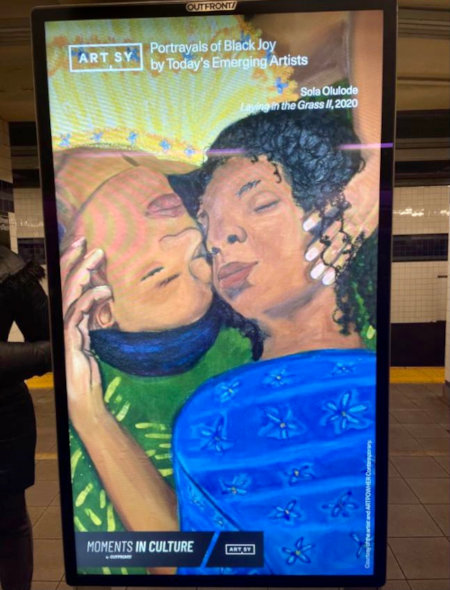 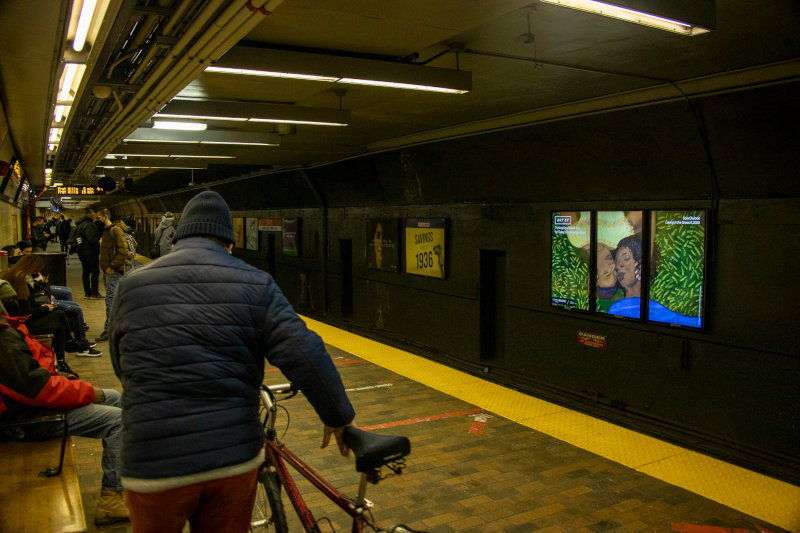 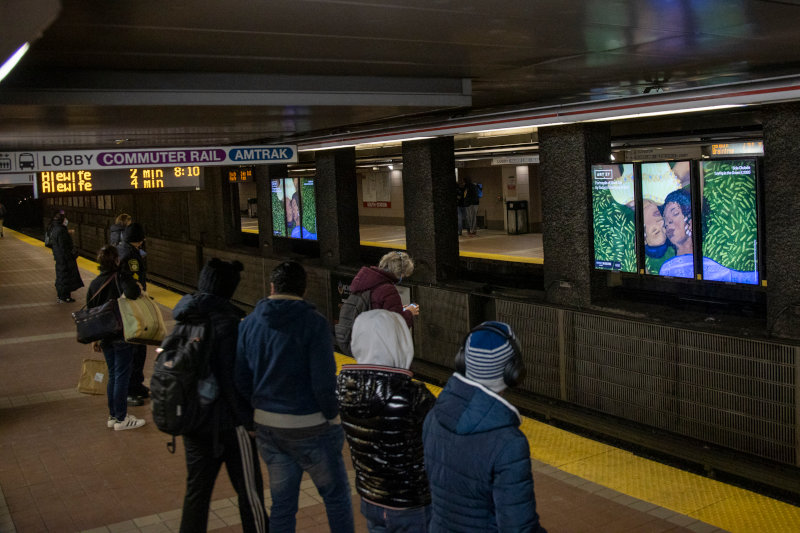 Due to the global health crisis, ARTPOWHER had to postpone its physical launch art show in Zurich. It’s our ambition to support our artists also durin this challenging time and we are pleased to announce our presence on Artsy and the collaboration with womxn contemporary artists Anne Vieux, Esther Ruiz and Madeline Bohrer. Black Lives Matter. I’m proud to be a member of a multi-colored family and I believe, that everyone has the right to move freely, no matter where they live or the color of their skin. The systemic inequalities minority communities experience are unbearable and unjust. ARTPOWHER stands for equality and inclusion and we stand against the racism and injustice Black and African American communities endure. In the spirit of solidarity, we are making contributions to Loveland Foundation, an organization who is committed to showing up for communities of color in unique and powerful ways, with particular focus on Black women and girls in the US. We will never truly be the society we seek to be until each one of us contributes to the change that needs to happen. "In a racist society it is not enough to be non-racist, we must be anti-racist." - Angela Y. Davis Anna Maurrasse-Tomaiuolo, Founder & CEO ARTPOWHER Contemporary